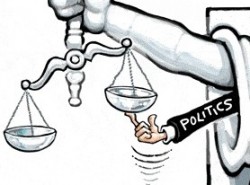 Law, in a free society, is nothing more than the rules by which the citizens of a society have agreed (either democratically or through representation in a republican form of government) to live by so as to respect and preserve the inalienable rights of all citizens.  In order for law to achieve this goal it must be applied equally and fairly to all citizens regardless of status or position within the society.  If the rule of law ever fails in a society, then it will no longer be civil as it will ultimately descend into anarchy and then tyranny.

What we are witnessing in our country as revealed in the leaked emails of the Hillary Clinton campaign, the DNC and other government agencies such as the FBI, is the utter contempt for the rule of law.  From these emails we are learning that those individuals in these groups believe and act as though laws regarding their conduct in elections and government functions do not apply to them.  As a result many in our society now have even less confidence in and therefore less feeling of affection and loyalty to the government.  When this happens then more and more citizens will develop a lack of respect and adherence to the rule of law, and societal structures will begin to crumble.

Our founders emphasized the importance of the people having confidence in their government and their representatives in order to maintain a representative government based upon free principles.  William Findley, an Anti-Federalist from Pennsylvania who was later the first Representative to be given the title “Father of the House” due to his long service in Congress, wrote “…for as a republican government rests on the people’s confidence, whatever weakens that confidence saps the foundations of the government.”

A final point that we are learning in these emails is just as alarming, namely that our media is, as many have suspected, not fulfilling its role as a check against government abuses and violation of law.  The founders emphasized how critical it was in a free society that the press be the people’s watchdog in order for freedom and liberties to flourish.

The guarantee of the freedom of the press in our first amendment means free from government control and censorship.  Whenever a free press coludges with the government or certain ones in power, then it ceases to be a free press and instead becomes a propagandist arm of the government which is a characteristic of totalitarian regimes and not that of a free country.

Justice is not served when those in government and powerful positions are not held accountable to the rule of law as other citizens would be.  When the people’s designated watchdog turns on them, then all confidence in it and the government withers away.  When that process runs its course then the question becomes, will people rise up and revolt to reassert their rights or will they meekly submit the the darkness of despair and tyranny.  As King Solomon succinctly stated in the book of Proverbs, “By justice a king gives a country stability, but one who is greedy for bribes tears it down.”  Far too many of our leaders and leader-want-to-bes should take that nugget of wisdom to heart.