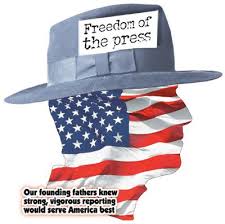 That might well be our response to the revelations now being manifested in the publication of the emails of Hillary Clinton and her campaign.  Everyone knew in their hearts this to be the case so when it is now revealed to be fact, the feeling might well be “so what?”  Yet this is not a proper response for it implies an attitude of indifference, and what we have learned about our press should disturb us greatly.

The role of the press in a free society was of paramount importance to our founders, so much so that it was repeatedly stressed in their debates and insisted upon having it protected within a bill of rights.  So it was that the first amendment to our Constitution guarantees to us that “Congress shall make no law…abridging the freedom of speech, or of the press;”

What is the meaning, then, of maintaining freedom of the press?  When the Virginia convention ratified the Constitution, those in opposition insisted that their ratification report include recommended amendments to be considered as changes to the Constitution once it was put into effect.  The 16th proposal stated the importance they felt was the role of a free press:  “…that the freedom of the press is one of the greatest bulwarks of liberty, and ought not to be violated.”  The Anti-Federalist “Centinel”, on October 5, 1787, described the freedom of the press as “that grand palladium of freedom, and scourge of tyrants.”  The aim was to ensure that the government would not interfere with the free discourse of ideas and information, even when it was critical of the policies of the government.  In short, the press was to be a watchdog against government abuses and threats to the liberties and freedom of the people.

Yet Madison wrote of an even greater threat to the destruction of this role of the press.  In the closing remarks of his “Observations on the ‘Draught of a Constitution for Virginia'”, published on October 11, 1788, he stated “the Exemption of the press from liability in every case for true facts, is also an innovation and as such ought to be well considered.  This essential branch of liberty is perhaps more in danger of being interrupted by local tumults, or the silent awe of a predominant party, than by any direct attacks of Power.”   So for the press to be totally free, the concept should incorporate not only the principle of freedom from outside censorship, but also freedom from bias and collusion.

Sadly, today, Madison’s fear has come to pass.  We have a press (encompassing all mediums) that could be said to be in “awe of a predominant party”, i.e. the Progressives in the Democrat party, insomuch as not only are they in “awe” but have thrown in with them.  No longer are they the “bulwark of liberty”, the “grand palladium of freedom”.  Our press today is well described in the words of Thomas Jefferson who, though an ardent defender of the principle of freedom of the press, had this to say about the press of his time in a letter to Walter Jones in 1814:

“I deplore… the putrid state into which our newspapers have passed and the malignity, the vulgarity, and mendacious spirit of those who write for them… These ordures are rapidly depraving the public taste and lessening its relish for sound food. As vehicles of information and a curb on our funtionaries, they have rendered themselves useless by forfeiting all title to belief… This has, in a great degree, been produced by the violence and malignity of party spirit.”

Yes, deplorable indeed is the term that more aptly applies to our modern-day media rather than to the citizens whose freedom is put in peril by the failure of the press to fulfill its duty as a censor to those in power.