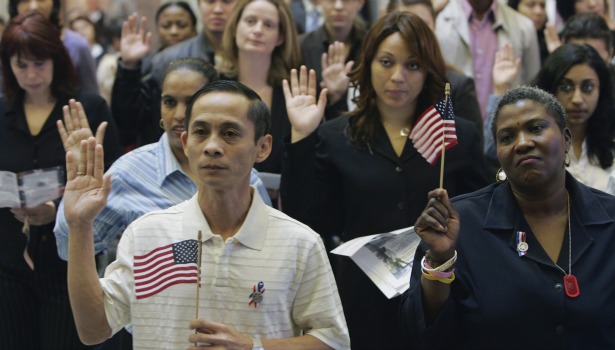 Today there is much talk about countries devaluing their currencies in an attempt to make their exports cheaper and thereby boost their economies.  Here in our country we have another serious devaluation going on, that of citizenship.

Citizenship does not entail “rights” properly understood.  Rights are those things which every individual possesses by virtue of being a part of the human race as they come, as Jefferson stated, from our Creator and are therefore inalienable.  Government, therefore, can neither grant nor take away rights (although tyrannical governments can and do restrict them).

Citizenship is an honor that governments bestow upon those individuals who meet the requirements that the civil society has set forth.  Civil societies, according to John Locke, are formed when individuals band together and agree to defer some of their natural rights to the group (i.e., government) so that they may exist in an orderly and peaceful fashion.

Becoming a citizen, then, carries with it certain privileges and responsibilities.  Some responsibilities, for example, fall upon both citizen and non-citizen alike.  For example, paying taxes to the government is a responsibility of both classes of individuals within a society as both groups benefit from the actions of government (protection from invasion, personal injury, etc).  However, privileges are those things reserved for citizens alone.

As we approach the upcoming pivotal election this fall it is important to bear in mind that one such privilege is that of voting. Contrary to what many may believe, there is no such thing as “the right to vote” because voting is an act granted by government, not by our Creator.  Therefore, voting is a privilege that comes with the honor of citizenship and if one has not met the stipulations for earning citizenship they have no claim on being allowed to vote.

In a free society, voting is the means by which those who have banded together to form that civil society determine how they, as a society, wish to be governed.  Those who are not yet citizens have no allegiance to the group and are, in effect, loyal only to themselves.  Consequently they should have no say in how those who do should be governed or to what they should be obligated.  Such is the reason why it is critical that the integrity of the vote be upheld and that proof of citizenship be mandated for those who go to the polls to cast their ballots.

However, those on the left have completely misunderstood this basic concept of the nature of citizenship and are pushing for open elections – i.e.,  granting all inhabitants within the boundaries of our land this privilege.  California has recently passed legislation that will permit illegals (non-citizens) access to the voting booth.  Such action devalues citizenship, for if this privilege is not restrictive, then of what use is citizenship?  If citizenship is not something to be valued and held to be a distinctive identifier of those within a country, then how can a civil society be maintained?  The answer is there is no value and civil society will eventually splinter into sundry parts, each vying for their own special benefits rather than the good of all society.  In such a circumstance America (or any country) will cease to be a country.

Finally, voting is one of the privileges of citizenship that also falls into the realm of responsibility.  If citizens fail to live up to this responsibility, then eventually the time will come when this failure will result in a government that deems such privileges are no longer to be granted, and all of society falls under the dark cloud of tyranny where our Creator-granted rights are restricted.

At the bottom of this newsletter you will see the cover to a new book, “The Handbook for We The People: A Primer on Strict Construction of the Constitution”.   Originally, the book was written with the intent to serve as a study guide to the fundamentals of our Constitution and the principles of the government it created for high school students, but it is an excellent tool for anyone who would like to have an understanding of the original intent of the authors of the Constitution.

The author, a good friend of mine, used several sources in putting this guide together.  The principles covered were based upon the writings of a retired attorney who is a devoted student and lecturer on the Constitution who writes under the pseudonym “Publius Huldah” (whom some of you may be acquainted with) along with writings of the founders including the Federalist Papers and Webster’s 1828 Dictionary which gives the meanings of the words as understood at the time of the writing of the Constitution.

The book is an easy read and contains seven chapters.  The first chapter covers the basics of the principles behind the Constitution such as a brief description of Federalism, republican government, etc.  The next three chapters cover in brief the enumerated powers of each of the three branches of government and touches on topics that are much in the news today such as  the major clauses of governmental power (Welfare, Commerce, Necessary and Proper) and how they were intended to be understood by the founders.

Chapter six builds upon the principle of federalism and republicanism and delves into the topic of nullification – a tool, as explained in the chapter, the founders put in place for the states to use in keeping  the federal government within its constitutional boundaries.  Chapter seven focuses on the issue hotly debated today in regards to the relationship between religion and the state.  The final chapter covers the concept of making amendments to the Constitution, including a brief look at the idea of what some are calling an “Article V Convention of the States”.

At the end of each chapter there is a list of questions and assignments to encourage the reader to delve deeper into the subject matter presented in the chapter.  In the appendix is a list of references such as the text of the Constitution, the Declaration of Independence and a glossary of terms that are critical to understanding the original intent of our founders.

The prophet Hosea of ancient Israel, speaking for the Lord, declared “My people are destroyed for a lack of knowledge.”  It is the intent of this book to help our youth, citizens, and yes, even government officials at all levels, gain a basic knowledge so as to keep our republic from being destroyed.  I highly recommend the book and would encourage anyone interested to look into it and use it for your children, grandchildren as well as any teachers and government officials you can convince to read it.

As a disclaimer, I did help in the early proofing of the book and making suggestions regarding the chapter questions; yet I have no financial interest at stake in the proceeds of the sales.  My only concern is to get an excellent primer into the hands of those who wish to gain a firm grasp of the original intent of our Constitution.

Handbook for We the People 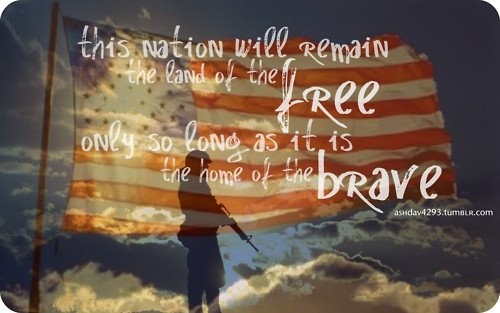 In all the times you’ve sung/heard that last phrase in the first stanza of our national anthem, have you ever given much thought as to why those two concepts are joined together?  Reflecting back upon this past Monday when we remembered those who gave “the last full measure” to procure and secure our freedom, the inextricable connection between them becomes very clear.

We were established to be a land of free citizens through the bravery of a few who sought to make their home in a land of freedom.   When those 56 men in Philadelphia pledged their lives, fortunes and sacred honor by signing our Declaration of Independence, they were bravely signing their death warrants in the eyes of the British Crown.  It was their burning passion for liberty over their fear of death, as expressed by Patrick Henry, that gave them the courage to sign that document and bequeath to us the freedom we now see slipping from our grasp.

How is it that we sing this phrase and yet no longer act like we mean it or believe it?  Are we a “land of the free”?  Hardly; not like we were in times past nor as we were meant to be.  Are we the “home of the brave”?  For some we are, but not as many as there should be.  We have those among us who are yet brave in the defense of freedom – every man and woman who put on the uniform of our military or local police and emergency service provider can be numbered among those who are “the brave.”

But what about the rest of us?  Why are we allowing those we elect to represent us to create laws that chip away at our freedom without any accountability or repercussion?  Why do we tolerate nameless, faceless, unelected and unaccountable bureaucrats to trample our constitutionally-guaranteed liberties with their unconstitutional acts and regulations?  Why do we cower in fear before them when it is they who should cower before us?  Is it because we have become too soft – too afraid to stand up and be counted because we fear becoming like a few brave fellow citizens who have and now languish in jail?

We celebrate two holidays – Memorial Day, in which we somberly reflect upon those brave souls who sacrificed their lives for us, and another, Veterans’ Day, for those who have and currently serve in defense of that freedom.  These men and women bravely left their homes to ensure that our land remains free, and some have returned, not to the embrace of their loved ones, but rather in a flag-draped casket.