Reincarnation of the Sturmabteilung

Lately we are witnessing a growing number of anarchistic protestations around our country.  Many are aimed at President Trump and his administration while others are aimed at individual conservatives or groups.  In some cases these anarchists try to disrupt the meetings of groups whose political beliefs they oppose or town hall meetings of conservative members of Congress.  In several instances they have turned violent, causing destruction of both private and public property, and at times even assaulted individuals attending the events.

The irony of all of these instances is they proclaim they are doing this in the defense of freedom and the rights guaranteed to us in our Bill of Rights, especially the right to free speech and peaceful assembly; yet their actions deny to those not in agreement with them the ability to exercise these rights.  Instead, those who hold opposing views (as well as President Trump and his advisors) are called “Fascists” and “Nazis” by these protestors.  Consequently, I think a short review of history of those who were truly “Fascists” and “Nazis” is in order to see just who the real “Nazis” are.

In 1921, Adolf Hitler created the Sturmabteilung, aka the SA or “Assault Division” of the Nazi Party.  These “Brown Shirts” (or “Storm Troopers”) were responsible for intimidating political opposition to the Nazi Party by violence, including personal physical attacks, property destruction and silencing of free speech both of the press and the disruption of meetings of opposing political parties.  They made a special target of the Jews, falsely depicting them as a target for arousing anger among the populace of Germany.  In short, they had total disregard for the law and the liberties of individuals.  In all respects they lived up to their credo, “All opposition must be stamped into the ground.” Their violence was based upon SA Sturmfuehrer Ernst Bayer’s attitude that  “Possession of the streets is the key to power.”

The SA was not as much concerned with loyalty to the German people as they were to the ideology of the Nazi party and German nationalism.  Their aim was to show the weakness of the Weimar Republic and the foolishness of democracy so as to gain power and impose their ideology upon the masses.

Consider these anarchists now causing a disruption in our society.  They are rioting in the streets, smashing windows and setting properties on fire, just as their SA forebears did.  Even police vehicles and equipment have been destroyed without fear of reprisal or arrest and imprisonment.  In the 1920s’ the police in Germany became intimidated in standing up to the actions of the SA.  Our police are not so much intimidated as they are handcuffed by the pc policies of the liberal politicians they must answer to, but the result is pretty much the same.  Some of these ruffians have even taken to wearing a “ninja-like” uniform, although nothing to the extreme like the SA.  However, these groups are in their infancy and being financed by big money leftists and business moguls, just like the SA was in the days of Hitler.

You do not hear of Tea Party, 912 organizations, and other conservative groups behaving in this manner, and yet they are the “Fascists”?  These protesters need to take a good, hard look in the mirror of history.  When they do, they will see themselves staring back, clad in brown uniforms with a red swastika armband around their left arms. 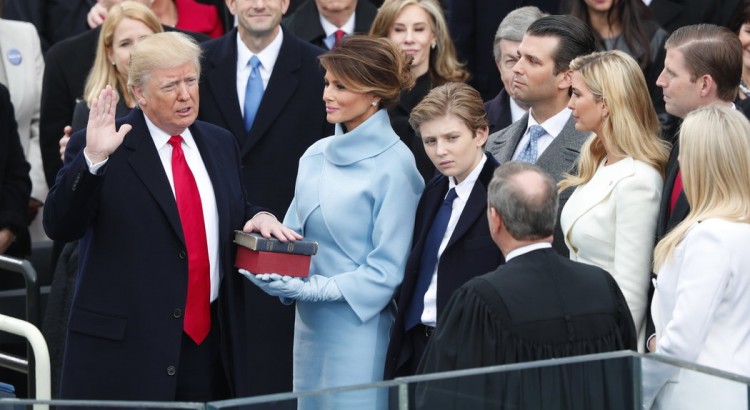 I’ve had it with these Democrat leaders and their minions spouting off that Donald Trump is an illegitimate president.  In making such an inaccurate claim they expose their ignorance of the English language, our Constitution and the principles of federalism.  In short, they are behaving in a petulant and childish manner, hardly worthy of leadership in our great country.

First, the term “illegitimate” is defined to be “not authorized by the law; not in accordance with accepted standards or rules.”  By claiming that Donald Trump’s presidency is “illegitimate” they are stating that his ascension to that office was “not authorized by the law.”  Article VI of our Constitution states “This Constitution,…shall be the supreme Law of the Land.”  This being the case we must then ask “Was Donald Trump elected in accordance with the dictates of the Constitution, which is the Law when it comes to such a matter?”  Article II, Section 1 of the Constitution regarding the election of the President states he shall “be elected as follows:  Each State shall appoint, in such Manner as the Legislature thereof may direct,  a Number of Electors…”  The 12th Amendment then spells out how these Electors from the states are to select a new President:  “The Electors shall meet in their respective states, and vote by ballot for President and Vice President…The person having the greatest number of votes shall be the President.”  In the 2016 Presidential election, Donald Trump received 306 electoral votes and Hillary Clinton only 232.  Donald Trump received “the greatest number of votes”, and therefore, according to “the Law”, (i.e., the Constitution as quoted above), he is the legitimate President of these United States.

Having now educated the Democrats regarding their ignorance of the definition of English terms and the Constitution, there is their final area of ignorance, namely that of federalism.  Those protesting Donald Trump as a legitimate president repeatedly fall back on the fact that he failed to win the popular vote (a matter of suspect given the number of illegals voting in California for instance, and other voting issues).  They talk about being a democracy when we are a federal republic.  Simply put, this means that citizens within a state have democratically elected individuals to serve as “Electors”, who in turn, in accordance with the law of the Constitution, select the President.  The reason the founders set up this system was to ensure that smaller states would not be ignored in the selection of the individual who would hold power over them.  This electoral arrangement preserves the power of the states as a check against one another so that a few states do not dictate to the many.

As for correcting their petulant and childish behavior the only solution is the one recommended by James Madison in the Federalist Papers – replacing them in the next election cycle.  Our nation deserves and needs better than what we are witnessing from these individuals.