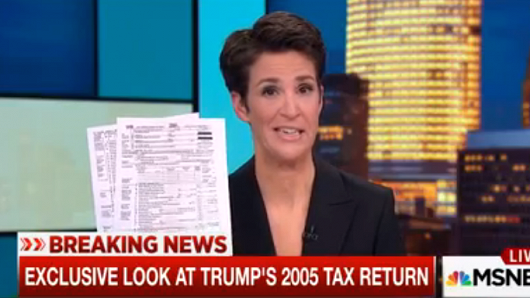 So now the whole world knows.  In 2005 the Trumps paid $38 million in income taxes to the general government, or 25% of their taxable income.  As we follow this “bombshell” dud in the news, pundits are assailing it on multiple fronts, but none are touching on the real problem with this incident.

Most of what I’ve heard is how whoever leaked this return committed a felony in that tax returns are, by law, to be kept private unless the individual chooses to voluntarily make them known.  This incident is used as yet another example of how there are those on the left are trying to undermine the new president and his administration.  All of that is true, but that is not the real problem.

Others have drawn comparisons of how much the Trumps paid in taxes compared to the percentages paid by others, especially those on the left to have attacked the president over how much he paid in taxes or whether or not he even paid any taxes.  It has been rightly pointed out that the president paid an outrageous portion of his income in taxes – twenty-five cents out of every taxable dollar he earned.  This illustrates how counter-productive any income tax system is, namely it punishes success and productivity.  From an economic standpoint and the principle of individual freedom as enunciated by the British political philosopher John Locke in the 17th century, this is a problem, but again, it is not the real problem.

Some commentators have rightly stated that this leak and it’s intended purpose of discrediting the president is illustrative of how dangerous it is for the government to have such information on us and how someone who has something against us can then use that information in an attempt to destroy our lives. This is getting close to the real problem with the president’s tax return, but it is not the real problem.

The real problem with the president’s tax return is that the government has possession of that information to begin with.  Think about it.  Last week I wrote about how the government is violating our fourth amendment rights (Badges?  We Don’t Need No Stinkin’ Badges!) by collecting all of our communication data, but on our income tax returns they capture how much money we earn, perhaps what we spend it on, the status of our health (depending upon our medical deductions), our business dealings and investments, and much more, and they have been doing so since 1913 when the 16th amendment was added to our Constitution.

This real problem with President Trump’s tax return is the same as with yours and mine – the government’s access to all sorts of our private information.  Underlying this real problem is that which gives the government this access, namely the 16th amendment.  If those pushing to amend our Constitution were really serious about restoring individual freedom and our liberties, repealing the 16th amendment would be one of their top three priorities (but more on that next week).