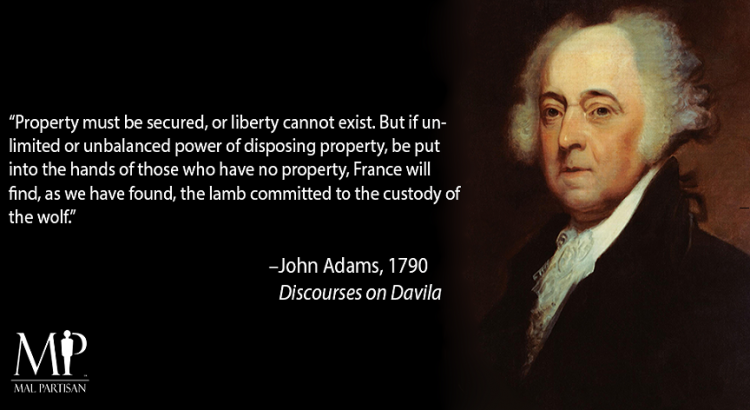 Pay your property taxes?  Pay your income taxes?  Comply with any EPA regulations regarding the use of your property?  Comply with a multitude of local zoning ordinances or permits in regards to your property?  We all know the answer to these questions as we’ve either experienced the consequences or know someone who has – the government, be it local, state and/or federal, swoops in and takes your property from you, fines you and perhaps even takes away your freedom by imprisoning you.

Does this sound like a government described by Patrick Henry during the Virginia ratification convention in 1788:  “for liberty ought to be the direct end of your Government”?  My question hardly needs a response.

John Taylor, one of the most eloquent and ardent defenders among our founders of individual liberty and limited government, had this to say on the matter of property and individual rights:

“The restrictions as to taxing property, imposed upon both the federal and state governments, also recognize only a limited power over it in either; and as to the application of taxes, it is,…expressly limited to the execution of the powers delegated, for which purpose and no other the power of taxation was bestowed.  Among the powers delegated, there is none to grant pensions, or to dispose of the public money according to the dictates of caprice, or benevolence,…

Societies are not instituted for the purpose of enabling governments to destroy natural rights; and as no man possesses a natural, or necessary, or convenient  power over the natural rights of another, a majority of men cannot have a right to surrender to a government an absolute power over these natural rights…the freedom of conscience and of labour are essentially natural rights…Neither nature, nor necessity, nor convenience, has invested the people, or their representatives, with an absolute power over private property, or over conscience;…” (Construction Construed, and Constitutions Vindicated, 1820, p. 276)

Let those words of wisdom from almost 200 years ago sink in.  Have we not done what Taylor said we have no right to do, namely surrendered our natural rights to a capricious government?  It is unfortunate that we cannot require all of these young people thronging to Bernie Sanders rallies to read Taylor’s writings before being allowed to vote.  Matter of fact, maybe it would help if all Americans were to read the wisdom of our founders before they cast their votes; maybe then we could elect men and women who would see to it that our government met Patrick Henry’s stated purpose of government.