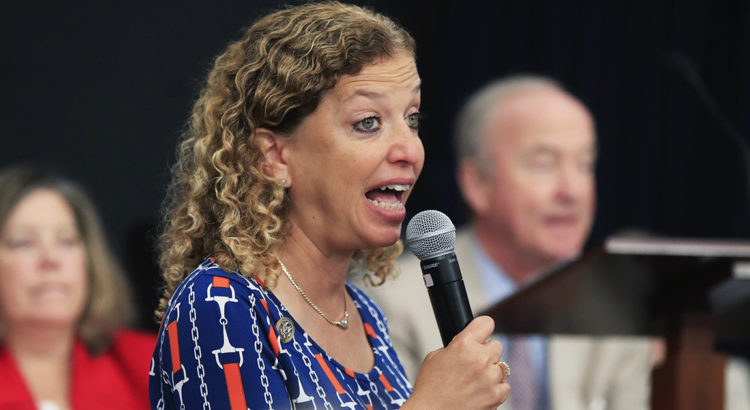 In 1989 when the Exxon oil tanker Valdez ran onto the Prince William Sound’s Bligh Reef in Alaska and polluted the waters along 1,000 miles of Alaskan shoreline because its captain was drunk, protestors took to singing a parody of this old children’s song:   “What do you do with a drunken sailor, early in the morning?  Make him captain of an Exxon tanker.”

The question could be raised similarly about what do you do with a felonious, and perhaps traitorous member of Congress?  Well, for the Democrats, you place them in positions of leadership (at least until the member’s actions become known widespread).  By now I’m certain most, if not all, of those reading this have heard the reports of how Democratic Representative and former head of the Democratic National Committee, Debbie Wasserman Schultz, hired Muslim individuals to be her IT technicians. These technicians had access to hers and a number of other Democratic Representatives’ computers and who knows how much sensitive data in our government files.  These same individuals defrauded us taxpayers and one was even caught trying to flee the country.  We now learn that Congresswoman Schultz continued payments to him and some of the others after they had been blocked from having access to the House computer network and could not perform the work for which they supposed had been engaged.

So what can be done with members of Congress who act so egregiously?  There’s the standard answer – vote them out of office.  Yet as someone who twice attempted in the primaries to oust a long, long-term Congressman , that is seldom done as they have too much money, influence and too many connections.  However, there is another way, but it takes more political courage than those sitting in Congress seldom exhibit.

Article I, Section 5, Clause 2 of the Constitution contains this remedy:

“Each House may determine the Rules of its Proceedings, punish its Members for disorderly Behaviour, and, with the Concurrence of two thirds, expel a member.”

I would say that Congresswoman Schultz’s actions certainly meet that rather low bar of “disorderly Behaviour” wouldn’t you?  There should be an immediate appointment of a special prosecutor to investigate her actions, and when all is brought forth, the other members of Congress should expel her.  But we all know that will never happen because far too many of those in Congress could also fall into similar condemnation.  After all, there is that long-standing principle of “Honor among thieves” in play with members of our Congress.  Would that we’d just have a smattering of pure, plain old “honor”.