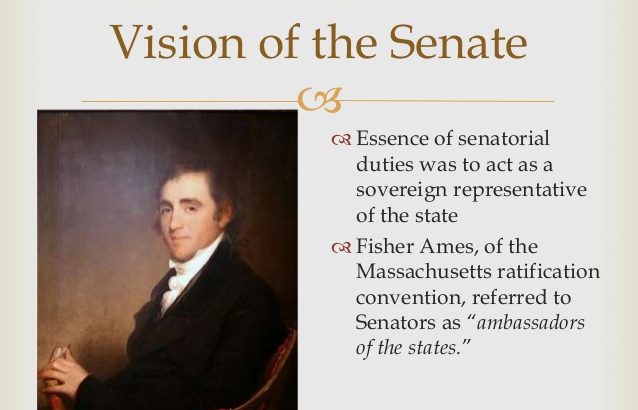 “Daddy/Mommy – Why do we have a Senate in the Congress?”  If/when your child asks you this question, you will know that you have a very perceptive and intuitive child on your hands, for this is a question that gets to the heart of how we have lost an important bulwark against the intrusion of our national government into our lives.

In The Federalist Number 28, Alexander Hamilton asserted that the States were to be guardians against the national government encroaching upon the rights of the individual citizens:

“It may be safely be received as an axiom in our political system that the State governments will, in all possible contingencies, afford complete security against invasions of the public liberty by the national authority.  Projects of usurpation cannot be masked under pretenses so likely to escape the penetration of select bodies of men, as of the people at large. The legislatures will have better means of information. They can discover the danger at a distance; and possessing all the organs of civil power, and the confidence of the people, they can at once adopt a regular plan of opposition, in which they can combine all the resources of the community. They can readily communicate with each other in the different States, and unite their common forces for the protection of their common liberty” (emphasis mine).

However, the same progressives (Democrats led by Woodrow Wilson and Northeastern Republicans led by Teddy Roosevelt) who brought us the income tax via the 16th amendment (see part 1 of this series – Three Fixes to Restoring Freedom and Federalism – Part 1 ) also brought us the 17th amendment which changed the selection of Senators from the state legislatures to the direct election by the people as we see today.  In doing this, it destroyed the power of the states over the Senators and left them free to the influence of others outside of their respective states.

This also dealt a severe blow to state legislatures in that many people are not as knowledgeable of or interested in their state representatives and senators.  If these were the men and women who selected the national Senators, then there would be a greater interest in and attention paid to those we elect to our state legislatures.

Consider how different the outcome would have been when the Socialist Democrats under the direction of President Obama and Nancy Pelosi foisted the so-called Affordable Care Act (aka “Obamacare”) upon us.  Over 30 of the states sued to thwart this monstrosity of a law and lost.  If the Senators had been answerable to the State governments, then those states could have put pressure on those they had appointed to the Senate to vote against the bill and the ACA would never have seen the light of day.

A repeal of the 17th amendment would return us to this bicameral form of legislation in which the interests of individuals and states would both be represented in a balanced form.  As it is now, we have two “houses of representatives”, which makes the Senate duplicative and thereby unnecessary.  It is true that there could be corruption within the state legislators in appointing senators as there was prior to the passage of the 17th amendment, but now we know the dangers of the direct election of senators and will hopefully be more vigilant in who we elect to our state legislatures.

Next week, how an unnecessary amendment and its misapplication has wrought havoc on our immigration problem and devalued American citizenship.