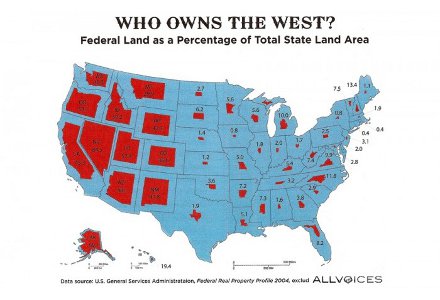 I remember singing “This land is your land, this land is my land”  in elementary music classes, but my how the sentiment has changed from “is” to “not”!  We have witnessed some startling developments as related to our Constitutional rights this past week in the confrontation between rancher Cliven Bundy and the Federal Department of the Bureau of Land Management.  You can read the news stories and blog essays about what happened there but I want to take a few paragraphs to delve below the surface of these events.

(As an aside, in the standoff between armed citizens and those armed members of this government agency, we have witnessed the precise reason why we have the second amendment right to bear arms – to resist the tyrannical overreach of the central government as well as the further trampling upon our Constitutional right of free speech when these government agents limited such speech to only certain restricted areas.)

There are some basic Constitutionally-related issues that need to be addressed.  First, who controls the land that is in dispute, and the corollary to it, who should control that land, Nevada or Washington DC?  Second, should any government entity control the land to begin with?  Third, if the land is “owned” by the state of Nevada, under what Constitutional authority does the federal government have in interfering with how the land is used?

Let us begin by turning to our Constitution and reading what properties it authorizes the general government to “own”.  Article I Section 8 lists the “enumerated powers” of the general government, and within those powers are given the kinds of properties it may possess:  (1) Post offices and post roads, (2) the District of the seat of the government, (3) Forts, (4) Magazines,  (5) Arsenals, (6) Dockyards, and (7) other “needful” buildings.  All of these properties were to be purchased by the general government upon the consent of legislature of the state from which the property was to be acquired.  The Union of the States did acquire property by other means, namely purchasing land from foreign countries (e.g., the “Louisiana Purchase”, Alaska) or as a result of war (Arizona, New Mexico, California, etc).  However, once these territories were divided into states, those states became as much a sovereign entity as the original thirteen.  Further, Article IV, Section 3 states that Congress shall have the power to either dispose of its territory or property as well as “make all needful Rules and Regulations” regarding said territory.

The general government owns approximately 85% of the state of Nevada, which pretty much destroys any notion of state sovereignty as far as the citizens of Nevada are concerned.  There is a dispute in this case as to whether or not the grazing range used by Mr. Bundy is federal or, as he alleges, land properly belonging to Nevada.  It appears that the property is technically federal land.  So the question is, does the property in Nevada at the heart of the dispute fall into any of those seven categories of property listed in Article I Section 8 of the Constitution, and if not, then even though Nevada may have at some point ceded the land to the general government, such would be an unconstitutional exchange.  The federal government has no business being in possession of that land.  It should belong to the citizens of Nevada to either sell to private individuals/companies or lease to ranchers such as Mr. Bundy.

Therefore, since the “federal” government has no constitutional right to own that land, the land should revert back to the state of Nevada, and as Nevada is a sovereign entity, the “federal” government has no right to interfere in how the land is used.  This is why I advocate for the return of all lands and property currently owned by the general government that do not fall within those above listed categories of the Constitution back to the states wherein such property is located.