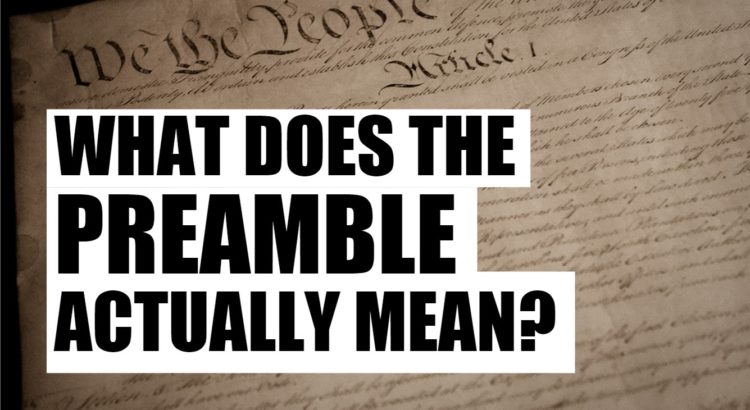 Most people, if you were to stop them on the street and ask them to recite the Preamble of our Constitution, would (I hope) at least remember the first three words, “We the People.”  If you were to read the original wording of the Preamble you would be surprised at the stilted and wordiness of it.  We owe the eloquence of what it came to be to the young delegate from Pennsylvania, Gouverneur Morris.  It was he who took that awkward draft of the preamble and gave it the wings on which it soars today.

Whereas some constitutions of other nations have either been explicitly incorporated to be a part of their constitution or by interpretation by their courts to carry the same weight as their constitution, the preamble of the US Constitution is not a part of constitutional law and has never been applied as such, even though many progressives attempt to use it as such.

A preamble merely sets for the purpose or objectives of what is to follow in the document to which it is the introduction.  When attached to a statute (or law) a preamble merely sets forth the intention that was in the minds of the legislature when it was enacted.  Inasmuch as the Constitution is the “supreme law of the land” according to Article VI, Section 2, then the Preamble is not law, but merely sets forth the intent for which our government was formulated and shaped by the following seven articles (and subsequent amendments) of it.

The Preamble has two parts:  the origin from whence it (and subsequently the government it established) came, and six objectives of the Constitution which follows it is to achieve.  The origin is not the states, as the wording in the original draft indicated, but rather, thanks to Gouverneur Morris, us – “We the People” (see my last essay “We the People”).  The following six “goals” if you will that the authors of the Constitution envisioned it would achieve are stated in broad, general terms – just as a thematic statement should be.  So when it mentions, for example, “to promote for the general welfare”, it was not the intention of the founders to be giving carte blanche to the government to do whatever it felt would be good for the general welfare of the country (but more on this in a subsequent essay).

Over the next six weeks, then, it will be my intent to look at each of these six objectives in the light in which the founders intended and not as progressives would have us believe we are to understand and apply them today.