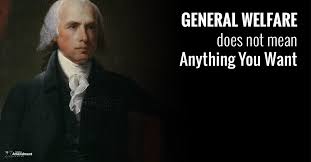 As I commented last week (The Preamble VII – “provice for the general welfare” (Part I)), the phrase “provide for the general welfare” has wrecked more havoc upon our country and put more of our liberties and freedom in jeopardy than perhaps any other clause in the Constitution (other than perhaps the “necessary and proper” clause).  As I shared then, those who opposed the ratification of the Constitution back in 1787-1788 argued that this clause would be ripe for abuse by future politicians to put in place anything and everything they deemed to be good for “the general welfare,” and that is exactly what has happened.

So how do we convince members of Congress today that they are way out of their constitutional bounds with much, if not indeed most, of what they have done in inserting the government into our lives?  The answer does not come from some lowly constitutional blogger such as myself – us “mere citizens” have no standing in the eyes of these scoffers at constitutional restraints.  No, I have a better witness to rebut them – James Madison, commonly referred to as “the father of the Constitution.”

As one of the three authors of The Federalist Papers, he countered the arguments of the Anti-Federalists regarding their alarms over this phrase in essay number 41.  In addressing the use of this phrase in the opening of Article I, Section 8 of the Constitution which contains the “enumerated powers” of Congress, he clearly defined the role of the phrase:

“But what color can the objection have, when a specification of the objects alluded to by these general terms immediately follows, and is not even separated by a longer pause than a semicolon? If the different parts of the same instrument ought to be so expounded, as to give meaning to every part which will bear it, shall one part of the same sentence be excluded altogether from a share in the meaning; and shall the more doubtful and indefinite terms be retained in their full extent, and the clear and precise expressions be denied any signification whatsoever? For what purpose could the enumeration of particular powers be inserted, if these and all others were meant to be included in the preceding general power? Nothing is more natural nor common than first to use a general phrase, and then to explain and qualify it by a recital of particulars.”

So then, just as we learned in our high school English classes in regards to writing a composition, you begin with a thematic statement that is broad and general that paints the full picture of what the paper is to be about, and then the rest of the following paragraphs develop, define and specify what is intended by that thematic statement.  Such then is the meaning, and proper use and application of the phrase “provide for the general welfare.” Or as James Madison might say – “General Welfare does not mean ‘Anything you want!’”