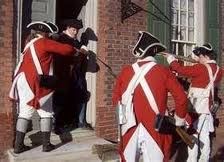 “No soldier shall, in time of peace be quartered in any house, without the consent of the Owner, nor in time of war, but in a manner to be prescribed by law.”

Today, most individuals would consider this a “dead’ amendment, worthless, and in need of expunging from its place within the Bill of Rights.  Many probably (out of ignorance of the time in which it was written) find it rather amusing that such a “trifling” matter was inserted into the Constitution.  Let us then re-examine this amendment and see just how relevant it still is today.

Granted, we have no fear of soldiers being quartered in our houses, especially against our will, but that was not the case in colonial America.  British rulers could and did order Americans (British subjects at the time) to house the King’s soldiers and provide them with meals, even if it meant they were turned out of their beds and went without food!  Note that this was not an occupying foreign power forcing this upon the populace (such as the Germans forcing similar lodgings upon say French citizens in WWII), but rather a people’s own government perpetrating this action.  So colossal was this imposition that the framers were determined to make certain that their new government would have severe limitations placed upon it in this regard.

Fine, you may say, but what does this have to do with us today?  To begin with, the actual prohibition, whether we feel it so remote as to be impossible, is still in place.  Yet if you “pull back the curtain” and look at the underlying principle, you can see just how important it is.  In a number of essays, I have referred back to the principle of individual liberty, as enunciated by the 16th century political philosopher John Locke, that it is founded upon the security of individual property rights.  Locke states that whatever we gain by the work of our hands belongs to no one else but us, and no one – including government – has the right to remove it from our hands without our consent.  By forcing Americans to house these soldiers the British government was in effect plundering the private property of its own subjects – something Locke stated it had no moral authority to do.

Fast forward to today and consider my comments in the closing paragraph of my essay from last week (Income Taxes and Bridal Dresses).  The EPA tells us what we can/cannot do with our property.  Fail to pay your property taxes and see just how long you remain in your house before the government seizes it and evicts you.  Fail to pay your income taxes – or at least what the IRS claims you owe – and you may be raided and your assets seized and sold out from under you at pennies on the dollar.  Try to open up a business without first gaining a business permit from the government, or practice a profession you spent years acquiring the necessary knowledge needed, such as in medicine.  All of these things our founders would be aghast at were they to come back to view their creation today.

Many know about the fourth amendment’s protection of our personal matters, but it is the third amendment which sets up this more expansive amendment following it, which constraints are also routinely shredded by our government.

Today, those less knowledgeable about the differences between rights and privileges go about chanting they have a “right” to this that or the other and yet miss the boat on the principle of what should be the shield for preserving our natural, inalienable rights.  It is past time we revisit and elevate the third amendment to its rightful place of respect among the other nine amendments in our Bill of Rights and insist that Washington respect the limits it and the others place upon their power.