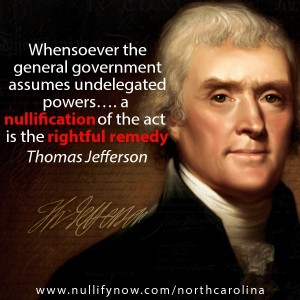 Rumors are swirling that once again President Obama is going to not only exceed federal constitutional authority, but also his presidential authority by issuing additional gun control regulations via executive order.  Since Congress lacks the will to carry out its constitutional obligation to impeach him and remove him from office, what alternatives are left to us?  To answer that question I want to take us back to the early years of our republic when the Federalists controlled the presidency (John Adams) as well as both houses of congress.

In June 1798, Congress passed and President Adams signed The Alien and Seditions Act, which was an abusive violation of individual rights and the Constitution as far as some of the citizens of Kentucky and Virginia were concerned.  In response Jefferson wrote on behalf of the state government of Kentucky what we today know as “The Kentucky Resolutions of 1798”, and he convinced Madison to do the same for the state of Virginia (“The Virginia Resolutions of 1798”).  In both of these documents they laid out the case that this legislation was in violation of the Constitution.   Jefferson more stridently declared no less than five times that the state of Kentucky held the legislation to be “altogether void and of no force.”

Madison’s draft was not as forceful as that of Jefferson’s and was much shorter, but in both cases these two giants of constitutional republicanism and federalism appealed to their sister-states to join them in resisting this law.  Madison summed up the appeal at the end of his resolutions with these words:

“…the General Assembly [of Virginia] doth solemnly appeal to the like dispositions of the other States, in confidence that they will concur with this Commonwealth in declaring, as it does hereby declare, that the acts aforesaid are unconstitutional, and that the necessary and proper measures will be taken by each, for cooperating with this State in maintaining unimpaired the authorities, rights, and liberties, reserved to the States respectively, or to the people.”

In his appeal, Jefferson went so far as to declare that “every State has a natural right in cases not within the compact, to nullify of their own authority all assumptions of power by others within their limits.”  Yet he also expressed the same approach as Madison that all of the states should band together in opposition to this usurpation by the “General Government” – “…that the co-States, recurring to their natural right in cases not made federal, will concur in declaring these acts void, and of no force, and will each take measures of its own for providing that neither these acts, nor any others of the General Government not plainly and intentionally authorized by the Constitution, shall be exercised within their respective territories.”

When Obamacare was enacted over thirty states filed suit with the Supreme Court as to its unconstitutionality, and we all know how Chief Justice Roberts’ twisted logic blunted that effort.  What should have been done regarding that legislation, and as Jefferson stated about “these acts, nor any others of the General Government not plainly and intentionally authorized by the Constitution“, was to band together with the legislatures of each of them issuing the same kind of declaration as Jefferson and Madison did on behalf of Kentucky and Virginia in 1798.

Unfortunately, Jefferson’s and Madison’s pleadings fell on deaf ears, and so the Act remained in effect until Jefferson was elected president and the Democrat-Republicans gained control of Congress in 1801 when they repealed the law.  However, consider this scenario:  over 30 states (or more) join hands and stand up as a united group against these onerous overreaches of the general government, be it Obamacare, the EPA, you name it; what would be the likelihood that Washington could roll over that many states like they might be able to do to one or a few?

If you read The Federalist Papers, the debates of the Constitutional Convention and the state ratifying conventions as well as the writings of the Anti-Federalists, you will hear one common argument among them all – namely, “in our political system…the State governments will, in all possible contingencies, afford complete security against invasions of the public liberty by the national authority” (Alexander Hamilton, Federalist #28).  It’s time for the states today to stand upon the shoulders of Jefferson and Madison and follow their lead.