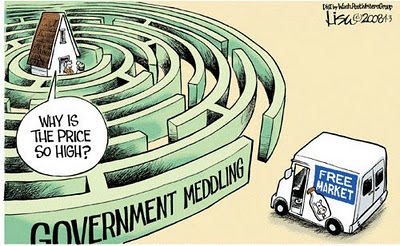 …and I’m here to help” – the nine most terrifying words in the English language according to Ronald Reagan.  We laugh, but painfully because we know deep down it’s true.  But why?  The answer is the law of unintended consequences.

The most recent case in point:  the flood victims of Louisiana.  Tens of thousands of families have been displaced, their homes destroyed  and their lives turned inside out.  These families face the challenge of trying to re-build without any insurance funds to cover the costs, leaving them in dire straits.  Jill Stein, the Green Party candidate for President places the blame on the bogus notion of man-made “climate change.”  Some may blame the Army Corps of Engineers for not properly building dykes and levees, while others may even blame God.

Here then is the result of the law of unintended consequences.  Those in government felt that it was the “right thing to do” to offer folks this insurance, and in so doing make themselves feel they had performed the function to which government was created.  Yet because government stepped in and determined some to be eligible and others not, many are now facing ruined lives.

To begin with, it is not the government’s role to provide insurance – it is not one of the limited, enumerated powers granted it by the Constitution.  Second, by stepping outside its limitations, it provided a false sense of security to those living in the affected areas who were told they had no need of the coverage.  Third, and this is the ultimate unintended consequence of government’s overstepping, it indirectly encourages individuals and companies to take risks they otherwise would not take.  If you have the guarantee of government backing that you will be provided the money to rebuild your home, business, etc, then you might risk living in an area such as what would otherwise be a place you would avoid.

We saw the same thing in the bailouts a few years ago when banks and investment houses were “saved” by government handouts because they were “too big to fail.”  Why did the housing market collapse?  In a nutshell, it was government interference in the marketplace and its encouraging, and in some instances coercing, banks to make risky loans they would not have made in times past.  Again, the lives of countless individuals were adversely affected, and in the end, we all were as the national debt swelled as a result.  There are so many other examples they could comprise a book instead of a short essay.

I am not saying those affected in Louisiana are not to be helped, but if the government didn’t take so much of our money in taxes for unconstitutional purposes, private citizens would have more funds available to donate as they are doing and the government would not be needed.

President Reagan was right; he also warned that whenever we hear those “nine most dangerous words”, the safest thing we can do is run.  This we must do – run back to our constitutional roots of a limited government, in the words of Thomas Jefferson, that is bound down by the chains of that precious document so that we can escape these kind of negative, unintended consequences.