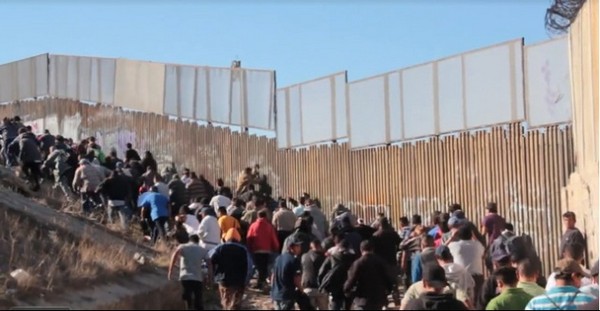 A debate can easily be had over what is the greatest threat to the US today.  Credible arguments can be made for international threats from ISIS, Russia, China and Korea.  However dangerous as those threats are thanks to the deliberate evisceration of our military and global strategy by this president, the more immediate threat comes from within, again thanks to Obama and his minions in Congress as this threat is not only a danger to us in the form of terrorism, but even more so in financial terms.  So, as we are looking at solutions to corralling the government’s runaway spending we must while implementing the previous four parts I’ve suggested turn our attention to the threat of immigration, both legal and illegal.

It cannot be denied that illegal immigration places a heavy burden upon our financial stability as these individuals cost schools, cities, counties, and states, in additional to the federal government, much more than they can ever hope to contribute.  In addition they take jobs that could/should go to Americans (despite the false argument that they only do jobs that Americans won’t do), thus compounding more financial worries upon those unemployed and straining government budgets at every level.

Legal immigration also  poses a problem in that those we allow in many times are either highly educated and thus complete for jobs against native Americans with similar education and training (think H1B visas) or they are from the lower economic rungs and offer little to our economy.

So, in approaching the issue of immigration both legal and illegal must be addressed.  Several argue that we should put a moratorium on all legal immigration, and that would be a needed first step in that arena.  We should not be letting immigrants into the country unless we at first are certain they are needed.  2015 America is not the same as 1900 America (or earlier).

As for illegal immigrants, there are several things that must be done, all of which have been put forth by various other individuals (for the best information on the threat of illegal immigration I highly recommend the documentary series produced by Dennis Michael Lynch:  They Come to America – I, II, III).

First, the economic magnet that draws them here must be dismantled.  As Milton Friedman stated, you cannot have a welfare state and open borders as those pouring across into the country for all the “free stuff” will overwhelm and sink the system.  This means no more public education, no in-state tuition at universities and colleges, no free medical care at hospital emergency rooms, no food stamps, no housing assistance, etc.  It also means heavy penalties for businesses and individuals who hire illegals.  The enforcement of our immigration laws will not require an expansion of our government, and I’ll outline how in the next installment of this series.

Finally, those caught here must be deported back to their country of origin and the cost of such action be imposed via a corresponding reduction of foreign aid to the governments of those countries or the imposition of a tariff fee on imports from them (limited strictly to the cost of deportation).  This is the only way to incentivize those governments to focus on improving their own lot instead of sending their problems of impoverishment to our shores.

As you can see, the solution to our looming fiscal crisis is not just limited to “reduce spending” or elimination of duplication in the government or even unconstitutional spending.  All of these suggestions I have put forth are part of a fabric that most be woven and implemented together if any are to succeed.  The next piece of the puzzle is the other side of the fiscal coin, namely, revenue and how it is collected.