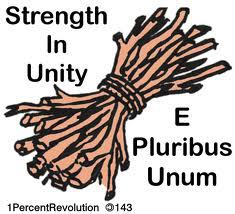 These past two weeks we have heard much on the topic of “unity” as the two major political parties strove to convince their delegates on the need for them to be “united.”  In the Republican convention they went further and stressed the need to “make America one again” as the theme of one of their evenings.

It is unfortunate that such an emphasis should be deemed necessary, but today we are indeed in dire need of being “one” again.  We as a country are more divided than any time in my lifetime since the 1960s’.  I could never have imagined Americans reverting back to the horrendous divisiveness of that decade, and yet we have.  However, as one studies our history unity has always been rather tenuous, from the debates over how to form a “United States” to a war between the states through the turbulent decades of social unrest and change of the last century.

Unity is achieved when individuals or groups join together based upon a commonality.  In the case of our political parties, that common ground appears to be the defeat of the opposing party.  Yet for true unity to be realized, that common bond must be of a positive nature.  So we are led to ask, “What common force brought together those original thirteen diverse colonies who often had more things at odds with each other than not?”  The answer can be found in the speeches and writings of our founders, culminating in the words of our Declaration of Independence – Liberty!  It is (or was) the same common ground that drew so many to our shores over the past two centuries, as echoed in the poem on the base of the Statue of Liberty:  “Give me your tired, your poor, your huddled masses yearning to breathe free.”

Yet today, is this the common thread among us?  It strikes me that there is more of a desire to fracture ourselves into different groups and to obtain benefits for our group at the expense of the others and that we are being flooded with people from other countries who desire the freebies available to them and not to become united as part of the American fabric.  Unity and freedom will never be achieved from such seeds.  Only when we acknowledge that to achieve true individual freedom we must come together based upon common grounds will freedom and unity be realized.

In this conclusion to Part I of his exposition of his insights into the United States of the 1830s’, Alexis de Tocqueville opined:

“If this process of assimilation draws foreign peoples closer together, it is all the more true that the branches of the same people cannot stay strangers to each other.

Therefore, a time will come when we shall be able to see in North America one hundred and fifty million people all equal to one another, all belonging to the same family, sharing the same beginnings, the same civilization, the same language, the same religion, the same ways, the same customs and among whom thought will circulate in similar forms, depicted in the same colors.  All else is uncertain but this is certain.”

Or, as he could have said, E Pluribus Unum:  “Out of many, one.”  Hopefully, when this election season is over we can once again be united as one.