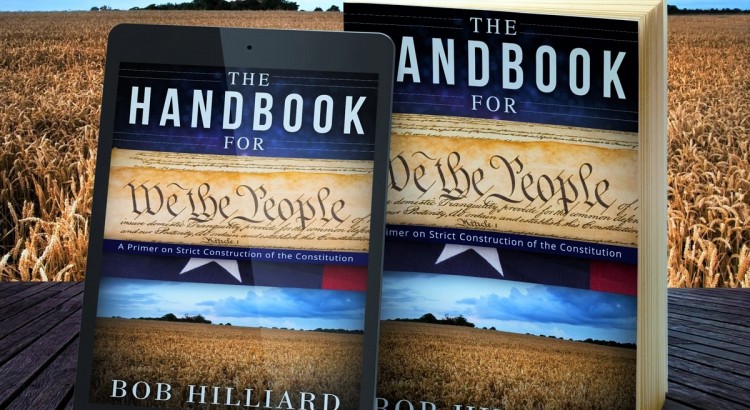 At the bottom of this newsletter you will see the cover to a new book, “The Handbook for We The People: A Primer on Strict Construction of the Constitution”.   Originally, the book was written with the intent to serve as a study guide to the fundamentals of our Constitution and the principles of the government it created for high school students, but it is an excellent tool for anyone who would like to have an understanding of the original intent of the authors of the Constitution.

The author, a good friend of mine, used several sources in putting this guide together.  The principles covered were based upon the writings of a retired attorney who is a devoted student and lecturer on the Constitution who writes under the pseudonym “Publius Huldah” (whom some of you may be acquainted with) along with writings of the founders including the Federalist Papers and Webster’s 1828 Dictionary which gives the meanings of the words as understood at the time of the writing of the Constitution.

The book is an easy read and contains seven chapters.  The first chapter covers the basics of the principles behind the Constitution such as a brief description of Federalism, republican government, etc.  The next three chapters cover in brief the enumerated powers of each of the three branches of government and touches on topics that are much in the news today such as  the major clauses of governmental power (Welfare, Commerce, Necessary and Proper) and how they were intended to be understood by the founders.

Chapter six builds upon the principle of federalism and republicanism and delves into the topic of nullification – a tool, as explained in the chapter, the founders put in place for the states to use in keeping  the federal government within its constitutional boundaries.  Chapter seven focuses on the issue hotly debated today in regards to the relationship between religion and the state.  The final chapter covers the concept of making amendments to the Constitution, including a brief look at the idea of what some are calling an “Article V Convention of the States”.

At the end of each chapter there is a list of questions and assignments to encourage the reader to delve deeper into the subject matter presented in the chapter.  In the appendix is a list of references such as the text of the Constitution, the Declaration of Independence and a glossary of terms that are critical to understanding the original intent of our founders.

The prophet Hosea of ancient Israel, speaking for the Lord, declared “My people are destroyed for a lack of knowledge.”  It is the intent of this book to help our youth, citizens, and yes, even government officials at all levels, gain a basic knowledge so as to keep our republic from being destroyed.  I highly recommend the book and would encourage anyone interested to look into it and use it for your children, grandchildren as well as any teachers and government officials you can convince to read it.

As a disclaimer, I did help in the early proofing of the book and making suggestions regarding the chapter questions; yet I have no financial interest at stake in the proceeds of the sales.  My only concern is to get an excellent primer into the hands of those who wish to gain a firm grasp of the original intent of our Constitution.

Handbook for We the People