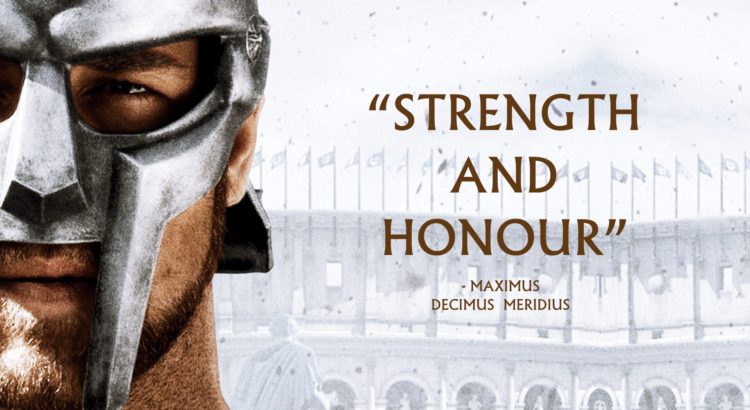 When the Constitutional Convention of 1787 had completed their work on crafting what is now our Constitution, as the aged and feeble Benjamin Franklin was being helped away from Independence Hall where the delegates had been meeting, a woman called out to him “Doctor Franklin, what have you got for us?”  His reply was classic – “A republic, madam – if you can keep it!”

There have been a number of republics down through the ages; one of the greatest was the ancient Republic of Rome.  We all know how it was with the advent of Julius Caesar and the subsequent rise of Octavian (aka Augustus Caesar) that the Roman Republic was dealt its death blow and replaced with a monarchial form of government headed by an emperor.

In the movie Gladiator staring Russell Crowe, there is an interesting exchange between Crowe’s character Maximus, the honored general of the Roman army, and the aged and dying Caesar, Marcus.  The conversation takes place in Caesar’s tent following a bloody but victorious battle.  In the conversation, Marcus tries to convince Maximus to be his successor because his own son, Commodus, was evil and not fit to rule.  Allow me to share some clips of their conversation:

MAXIMUS: You sent for me Caesar? [No response. Maximus turns to look at the weak and old Marcus.] Caesar?

MARCUS: Tell me again Maximus, why are we here?

MAXIMUS: For the glory of the empire, Sire.

MARCUS: Ah yes, ah yes. I remember. You see that map, Maximus? That is the world which I created. For 25 years, I have conquered, spilt blood, expanded the empire. Since I became Caesar I have known four years without war – four years of peace in 20. And for what? I brought the sword, nothing more.

MAXIMUS: 5,000 of my men are out there in the freezing mud. 3,000 are cleaved and bloodied. 2,000 will never leave this place. I will not believe they fought and died for nothing.

MARCUS: And what would you believe?

MAXIMUS: They fought for YOU and for Rome.

MARCUS: And what is Rome, Maximus?

MAXIMUS: I have seen much of the rest of the world. It is brutal and cruel and dark. Rome is the light.

MARCUS: Yet you have never been there. You have not seen what it has become. I am dying, Maximus. When a man sees his end he wants to know that there has been some purpose to his life. How will the world speak my name in years to come? Will I be known as the philosopher, the warrior, the tyrant. Or will I be remembered as the Emperor who gave Rome back her true self? There was once a dream that was Rome, you could only whisper it. Anything more than a whisper and it would vanish. It was so fragile and I fear that it will not survive the winter.

Maximus, let us whisper now. Together, you and I. You have a son? [Maximus nods.] Tell me about your home.

[Maximus looks a bit surprised at the invitation to hear of his home, but eagerly and proudly describes it — a peaceful happiness overcome him as he speaks.]

MARCUS: I envy you, Maximus. It is a good home. Worth fighting for? [Maximus nods yes and Marcus rises.] There is one more duty that I ask of you before you go home.

MAXIMUS: What will you have me do Caesar?

MARCUS: I want you to become the protector of Rome after I die. I will empower you, to one end alone, to give power back to the people of Rome and end the corruption that has crippled it. [Shock and bewilderment overcome Maximus. He tries to keep from displaying these feelings. Hearing no response, Marcus continues.] Will you accept this great honour that I have offered?

MAXIMUS: With all my heart, no.

MARCUS: [Tenderly holding Maximus’ head with both hands]: Maximus, that is why it must be you.

MAXIMUS: But surely a prefect, a senator, somebody who knows the city, who understands her politics….

MARCUS: But you have not been corrupted by her politics.

If you have seen the movie, you know that Commodus murders his father and assumes the title of Caesar.  He attempts to have Maximus executed but Maximus escapes and ends up as a gladiator.  As a gladiator he ends up fighting in the Coliseum in Rome, and in a one-on-one battle with Commodus, kills him and returns power back to the people.

In 2016 the citizens of this republic elected a non-politician to be our president because we were tired of the corruption of those who have worked their way up the political ladder that is our federal government.  The appeal of Donald Trump to many was he had not been corrupted by the politics of “Rome” (Washington, DC) and pursued the office because of his perceived genuine love for his country and desire to make it great again.

Now, as President, he finds himself in what I would style as the role of a gladiator as well as president.  He is constantly beset by and having to combat those who are corrupt in both political parties, the media and the elite intelligentsia of so-called “higher learning.”

Do I agree with everything President Trump has done?  Absolutely not.  Do I think he is firmly grounded on constitutional principles?  Unfortunately no.  But one thing I do know – he has the tenacity and courage of a gladiator, and with our republic on the brink of vanishing, we need someone who is not afraid to wield a sword in the arena of political combat.

In the 2016 election we had the choice between one in the mold of the corrupt and power-hungry Commodus and one who was not of the political class and was asked by the people to return the power of government to them so that like ancient Rome, America can once again be that shining light on the hill.  Like him or not, President Trump could well turn out to be our Maximus.