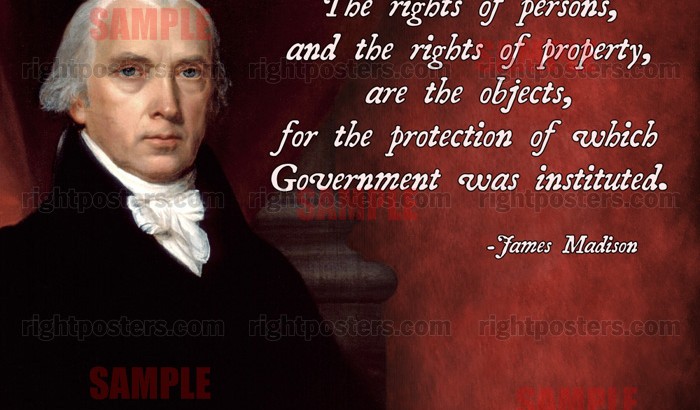 Equivocates into the beginning of the loss of all rights and liberties.  The right to property (be it money, land, intellectual property, etc) is the foundation of individual liberty.  I have made this point in times past by quoting the 17th century political philosopher, John Locke, who wrote:

“…every man has a property in his own person; this nobody has any right to but himself.  The labour of his body and the work of his hands we may say are properly his.  Whatsoever, then, he hath mixed his labour with, and joined to it something that is his own, and thereby makes it his property…For this labour being the unquestionable property of the labourer, no man but he can have a right to what that is once joined to…”

This fact was not a new concept to Locke; it is a concept as old as mankind’s earliest civilizations.  Every civilization from that of the ancient Sumerians to our time have held individual property to be sacrosanct.   That this is an inalienable right, i.e., one granted by our Creator and not bestowed upon us by man, is upheld by the fact that God included it in one of the ten commandments – “Thou shalt not steal.”  It is so important that this principle was incorporated in not just one amendment to our Constitution, but in four – the third, fourth, fifth and fourteenth!

When there is a loss of private property, depending upon the cause and scope, a number of situations may unfold, none of which are good.  A thief who attempts to steal someone’s property may be shot in the attempt, or if successful, cause the victims to feel violated.  When a group of individuals destroy the property of their fellow citizens, it creates a maelstrom exhibited in anarchy, such as we’ve recently witnessed in several of our cities this year.  Or it may be in the form of tyranny and oppression when government confiscates the property of its citizens through taxation, be it income or forfeiture due to the failure to pay property taxes.

Unfortunately, such is not new to America, or to mankind.  For example, we celebrate the “Boston Tea Party”, yet it was not any different than the looting we witnessed in Ferguson, Baltimore and Charlotte.  It was the willful, wanton and unlawful destruction of another’s property over the frustration of what was felt to be an injustice.

Our war for independence was begun over the attempt of the government to seize private property.  On April 19, 1775 British soldiers set out from Boston en route to Concord to seize a cache of munitions that were stored there.  The American militiamen, upon hearing of their approach, assembled in Lexington Commons to oppose them.  It was there that the “shot heard ’round the world” was fired and our fight for independence and freedom was launched.

So what’s the point of all this?  If we are to remain a civil society, then it must begin with a firmness to instill respect in the heart of every citizen this respect for each other and one another’s property.  We must demand that the government respect our property rights as well.  Without it, we will continue to slowly disintegrate as a society and a country.  The key to achieving this can be found in another of the ten commandments:  “Thou shalt not covet…”  We shun the wisdom and commands of God to our peril; but, it’s not too late to turn back to this foundation of life and liberty.