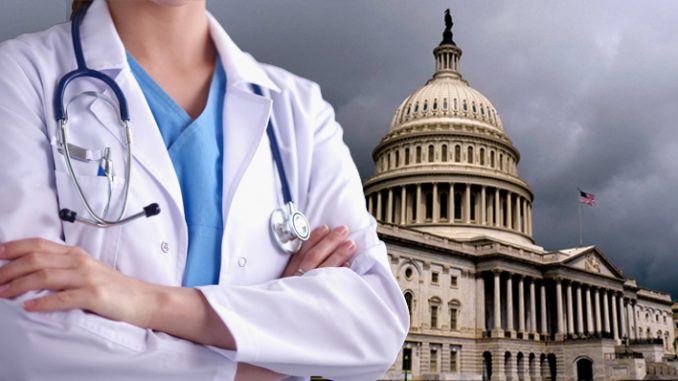 Congress and our new President are pushing to “repeal and replace” Obamacare.  I wholeheartedly applaud the goal of repealing Obamacare.  However, the greater issue surrounds its passage to begin with and the follow up notion of “replacing”.

Obamacare is a clear violation of the statement laid down by James Madison in Federalist 45 that “The powers delegated by the proposed Constitution to the federal government are few and defined.”  Nowhere in the Constitution’s enumeration of the federal government’s powers is there any hint of a reference to its operation in the realm of health care.  Consequently, from this basic truth, Obamacare is unconstitutional and on that ground demands repeal.

However, that same principle also demands that Congress and President Trump not seek any kind of “replacement” by the federal government.  The proper role of the government in healthcare from the standpoint of the Constitution is no role at all.  If anything, it could be argued that the power of Congress to regulate commerce among the several states would authorize it to pass legislation which would allow insurance companies located in one state to “sell” its services in all other states.  This commerce clause in Article I Section 8 was inserted to prevent the states from charging tariffs on goods sent into them from other states, and in a sense insurance services could be likened unto an importation of a product from one state into another.  Hence, Congress legislating that all states allow insurance companies in one state to sell in another would be within its constitutional purview.  (It seems such action should be unnecessary as Congress didn’t have to pass legislation requiring states to allow Chevrolet or Ford to send their products from Michigan and other locations to all of the other states, so why should it be required to force states to allow insurance companies to “sell across state lines”?)

Those who oppose this move of repealing the so-called “Affordable” Care Act claim that access to health insurance is a “right”.  I have addressed this matter in previous essays in more detail, but simply put, a “right” is something that has always been and will always be – something neither created nor granted by man.  Obviously, a cursory examination of the history of health insurance indicates that it fails this basic premise of “rights.”  The concept of health insurance is less than 100 years old and has changed and been modified considerably since its introduction into our society.  Therefore, access to health insurance cannot be a right in the same vein as the right to life, liberty and property.  There is a reason why companies that provide health insurance coverage options to their employees style it as a “benefit”, administered by their “Benefit Department”.  Benefits are something that can be given and taken back, unlike rights which cannot be.

I would hope that Congress and President Trump will indeed repeal Obamacare in its entirety and then butt out and allow the free market to provide a variety and innovative options from which we can choose coverage that is both affordable and appropriate for our individual needs.