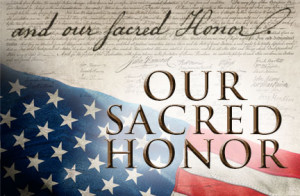 In the first paragraph of our Declaration of Independence it begins by unrolling a reference to human history as the canvass upon which the rest of the document will be painted.  In the second paragraph it pivots to the principles that transcend human history as the bold brush with which what follows is to be painted and ends with a noble attestation.

Those who know anything of it usually can only recite some of the first sentence of that second paragraph and that closing phrase, but are totally unacquainted with the bulk of what comes in-between.   Jefferson used a broad brush stroke to paint the background for the complaints of the colonies by painting the scene of government’s purpose and its relation to its citizens before returning to history to, with pinpoint strokes, sketch out the specifics of where the British government had failed in matching up to its obligatory “colors.”

Time and again he lays out the charge of the King’s (and Parliament’s) refusal to give heed to the concerns and welfare of the colonists.  He enunciates this failure with one specific example after another and ties them back to their being a violation of the principles set forth in that second paragraph.  If you take a few minutes to read them you can sense that many of these abuses could well be lodged against those who govern us in Washington, as well as in our state capitals and city halls.

However, a glaring contrast between now and then comes at the very end.  After starting out with a reference to history, setting the foundation of unassailable principles, spelling out the particulars springing forth from them, Jefferson returns to the higher level of appealing to Him from whom the principles he enunciated spring from and closing with the noblest of pledges:

“we mutually pledge to each other our Lives, our Fortunes and our sacred Honor.”

Today, however, we hear quibbling over whether or not a candidate pledges to support his opponent who defeats him in a primary.  Candidates are expected to pledge allegiance to their party’s “platform”, while their big money donors expect them to also pledge to do their bidding once the candidate is elected.  Lost in all of this is the idea of pledging lives, fortunes and sacred honor.  An elected official is to serve, i.e., to devote a limited portion of their lives in serving the lives of his/her fellow citizens; yet all too often they end up serving their own welfare.   Instead of expending their fortunes, they enrich their fortunes by manipulating their positions of power to extract riches from others they hold at ransom under threat of legislating oppressive government legislation and/or regulation.  And finally, we seldom see among them any semblance of honor.

In my first run for Congress, I came home after midnight one evening and couldn’t go to sleep.  I’d re-read the Declaration the day before and suddenly a modern version of it started coming to me, so I got up and hurriedly wrote the following Declaration that you can access here below.  I hope you find it encouraging.